History of the Library

As with many older libraries throughout Ontario, Pembroke Public Library can trace its history back to the late 1800s, when the Mechanic’s Institute and Library Association was formed. This association was designed to provide educational opportunities for workmen and tradesmen through book loans, reading rooms, lectures and classes. As demand for such opportunities increased, membership fees proved insufficient to maintain the Association, so that in 1901 the Pembroke Town Council assumed the library’s liabilities and declared it a Free Public Library. At this point the Library’s collection was housed on the second floor of a downtown retail establishment.

In the early years of the 20th century, grants from the Carnegie Corporation of New York became available, and some of Pembroke’s most prominent citizens worked to obtain the necessary funding in order to construct a proper library building. When a grant of $14,000 was obtained, the building committee together with Carnegie representatives reviewed a number of proposals from architects, finally settling on one considered ultra-modern for its day, a far cry from the normal Period-style architecture commonly used on library buildings.

Francis Conroy Sullivan, the successful bidder on the project, worked as an architect out of Ottawa, having studied in Chicago with the renowned genius of American architects, Frank Lloyd Wright. Sullivan was widely credited with bringing the Prairie School of Architecture to Canada, of which the Pembroke Public Library remains one of the most striking examples in existence. Indeed, many believe Frank Lloyd Wright himself participated in the design process for the early proposals for the building, although budgetary constraints forced Sullivan to prepare somewhat altered drawings for the final proposal. Nevertheless, Sullivan’s work mirrored much of Wright’s Prairie School buildings in many details.

Sullivan himself was a controversial character, known among his contemporaries as an obstinate perfectionist with an abrasive character. It was reported, in a 1912 letter to Pembroke’s mayor, that Sullivan objected to interference from the local librarian. “Just advise your committee and the Librarian that the equipment must be placed as designed and shown on the plans, no other way will be accepted, and if this is not acceptable to the Librarian, remove the Librarian”.

Sullivan ultimately lost his standing among Canada’s foremost architects due to heavy drinking, retreated to Frank Lloyd Wright’s Taliesen Studio in Arizona in 1929, and died there at the age of 47.

The Pembroke Public Library building was completed in 1914 at a total cost of $15, 500 plus $2,500 for the purchase of the land, of which $14,000 was the grant from the Carnegie Corporation. It was built by the Pembroke firm of Kehoe Bros.

Many older Pembroke residents still remember Miss Alma Beatty, who served 43 years as librarian, from 1901 until 1944. Membership in the library grew steadily over the years, with the basement level used frequently by the public as a meeting or lecture room. However, increased use of the library, especially by children, prompted Miss Latimer, the librarian in 1950, to state in her Annual Report, “Adults who brave the torrent of children between 3 pm and 5:30 pm are simply engulfed …The children need to be separate from the adults, because there are times when intrepid adult borrowers risk life and limb to get their books checked at the desk”. Finally, in 1957, the basement was renovated to house the Children’s Library.

In 1966 Town Council approved the Library’s proposal that an extension to the Library be the Town of Pembroke’s Centennial Year Project. The addition, officially opened in October 1967, was comprised of three levels constructed at the back of the original building: basement, main floor and mezzanine. Growth was so great that in 1974 an additional three levels were built on the north side of the library at a cost of over $120,000, every effort being made to conform to the original design and avoid alteration to the original façade.

The last quarter of the twentieth century witnessed still more changes to the physical building. In 1985 the Library became handicapped accessible with the construction of a lift as well as indoor and outdoor ramps, made possible with government grants and a generous gift of $15,000 from the Kiwanis Club.

In 1989 a group of library friends volunteered to restore the beautiful original chestnut woodwork along the main entrance stairs. The Library was designated by the City of Pembroke in 1991 as a building of historical and architectural significance. Leakage problems prompted many roof repairs, and in 1994 the front steps to the sidewalk were rebuilt, many elements of this design mirroring the original interior stairway. The Audio/Visual collection was re-located to the main floor in 1996 after a number of years in the basement level, and by the year 2000 the Library was able to completely renovate the entire basement level to incorporate a large and modern Children’s and Teen Department.

A computerized catalogue and circulation system was introduced in 1996, funded by a Federal Government Infrastructure Grant, and in 2000 the arrival of numerous computers courtesy of the Bill and Melinda Gates Foundation allowed free public Internet access for all.

In 2001 a security system was installed, and in 2006 the beautiful original hardwood floor was restored in the main floor area.

In 2009 the Adult reading room was re-dedicated as “The Subhash Mehta Memorial Reading Room” in honour of the Chief Librarian from 1970 to 2001.

In 2010, new lighting was installed through a generous bequest from the estate of the late Euloine Gertrude Trapp, a long-time patron. The decorative lighting was chosen to reflect the prairie-style design of the original Frank Lloyd Wright-inspired library building.

In 2014 celebrations were held to mark the 100th anniversary of the library building, and new front doors were installed replicating the originals.

By honouring the hard work and dedication of the librarians, staff, Board members, and volunteers who have come before, Pembroke Public Library continues to strive for excellence in providing for the educational, recreational and cultural needs of the citizens of Pembroke and area.

Strong emphasis on interior woodwork details, in this case varnished chestnut.  The ceiling and wall banding show strong vertical and horizontal symmetry, and the central staircase features newel posts which echo precisely the outside window surrounds.  The decorative wooden “grill” at the top of the stairs, and the two similar coat racks are typical Prairie-style details.

Tall windows in the “Mondrian” style, named after the famous Dutch painter, comprised of long and short sections of glass responding to the need for natural light. Many have the original
coloured glass.

Similar exterior cast stone surrounds around the tall side windows, as well as those over the entrance and basement windows.

Also, the original coal chute door in the south wall is still in evidence. Over the years the heating system has changed from coal to oil to gas, with the original cast iron radiators still in use.

The original vault is still in use as well.

Pembroke Public Library is currently open to the public with COVID-19 protocols in effect.

Staff are available to answer
questions by phone at
(613)-732-8844 or by email at fineprint@pembrokelibrary.ca 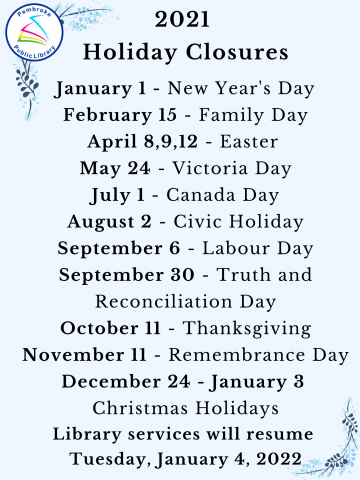